Author Jonathan Franzen has ticked off the Twittersphere as well as some in the publishing world for criticizing the notion that young writers must have at least a few hundred followers on the social media platform before a publisher will even look at their manuscript.

During a recent interview on BBC Radio 4’s Today program, the award-novelist said budding writers should focus on developing their craft rather than spending time promoting themselves online. His statement drew the ire of some publishers; one even dismissed Franzen’s position as nonsense.

But Franzen is right. The number of followers an author has on Twitter is not an indicator of talent or a barometer of how well their next book might sell, especially if it’s their first. And if you’re struggling to even finish your first manuscript, wasting time on Twitter won’t help you. And finally, why would anyone want to follow someone who has yet to be published? Social media is already full of people making a big deal of what they intend to do.

Does it make sense for more established authors to engage with followers on social media? Certainly, especially if authoring books is their primary source of income. Science fiction author Robert J. Sawyer was on the Internet early and engages with readers through Facebook and Twitter. He understands the importance of marketing himself because making sure his books sell is his livelihood, but if his books weren’t any good, no amount of promotion online or anywhere else would help his cause in the long run.

I follow a number of authors as well as comic book writers on Twitter, but that doesn’t mean I’ve bought any of their books. I enjoy reading John Scalzi’s blog, but I’ve only read Redshirts. I loved Ron Marz’s run on Green Lantern, but despite following him on Twitter I couldn’t tell you what he’s working on right now; I’m more interested in his thoughts on writing and the creative process.

Popularity on social media, whether it’s Facebook likes, Twitter followers or a high Klout score, is ultimately a meaningless metric; even the social media market gurus will tell you that, and it’s disheartening that agents or publishers might not consider a first manuscript just because a young author hasn’t already developed an online following.

A Tale of War, Science and Philosophy 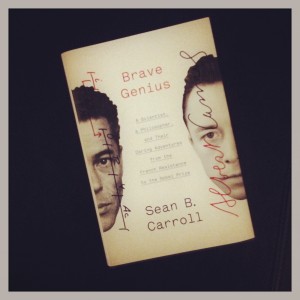 The first annual Toronto Science Festival was held at the University of Toronto last weekend. Following keynote speaker and Canadian astronaut Julie Payette, writer Sean B. Carroll took the stage to tell the compelling story of French biologist Jacques Monod, who was one of the most important players in 20th century science as well as the resistance movement in German-occupied France. The life of Monod and his friendship with philosopher Albert Camus is the subject of Carroll’s latest book, Brave Genius.

How to Collect Books the Proper Way

Amassing a large number of books (as well as comic books, in my case) isn’t that difficult, but true collectors must have a strategy that goes beyond simply hoarding. I parted with a large number of books, including Star Trek novels, when moved a couple of years ago; my criteria was keep the ones by my favorite authors rather than being a completest. My comic book collecting is guided by the availability of the singles issues in trade paperback compilations. Of course my Lego collection strategy is a whole other story…

Two publicists are running in the 2013 NYC Marathon as a way of raising funds to start a Diverse Worlds Grant, which would be administered by the Speculative Literature Foundation, to help writers from backgrounds traditionally underrepresented in the science fiction and fantasy genre to start and continue publishing. On a related note, October has been dubbed African American Speculative Fiction Month by a group of online enthusiasts.

Don’t Be Afraid to Freelance

I’ve been laid off three times in 15 years; each time I dabbled in part-time, freelance work while looking for my next full-time gig. Friends and industry peers kept suggesting I freelance full-time, but I didn’t think I had it in me. After just over a year of freelancing out of necessity and feeling that it’s a long-term and even a life-long path, I’m wondering why I didn’t try it sooner. Actually I do know why: it was these three myths that keep many people from going out on their own.

The Art of Writing for Academic Journals

One of my recent client engagements was working with academics to help write magazine articles. While technical, the publications weren’t academic journals. Writing for an academic journal has its own rules, writes Rowena Murray in the Guardian, and what seems like common sense isn’t common practice.

Gary Hilson is a Toronto-based storyteller.